Secorun Security of Logistic Processes is an IT solution unique in the market, synchronizing ERP class systems with the access control and “delivery and drivers notification” systems, making the whole logistic process secure. The system monitors and controls the loading, transport and the unloading of the cargo setting the critical checkpoints. Checkpoints make the process participants realize the task list correctly. The data aggregation from the YMS, TMS and WMS areas with the warehouse infrastructure allow the drivers to go through all the process stages intuitively and independently. Automation of the vehicle weighting, it’s access to certain security booths, gates and barriers together with the loading monitoring eliminates human errors (unintentional and intentional), making the departure from the warehouse impossible for an incorrectly loaded vehicle. The system also provides accountability of the supported processes.

The solution covers the processes running at the facility, from buildings and warehouse areas to entrance checkpoints, but it can also control the time of reaching the destination. The collected data allow the facility to significantly optimize costs and security.

“Full control and accountability of the logistic process –  is a thesis confirmed by successful implementations. The logistic processes are layered with an additional security layer, guaranteeing the identification, authentification and autorization of every step of the process.

In my opinion, the most important thing is that Secorun LPS fully covers the gaps in supply chain security.”

Shortening the time of third person stay at the facility area to the necessary minimum. Installation of the devices and applications that allow drivers to be guided through the whole process according to the guidelines.

Smooth course of the delivery, loading and deposit service processes – without unnecessary stops, with maximal automation of actions performed by the drivers, suppliers as part of the process.

Reduction of the error occurrence in loading the vehicle. By getting precise information, the driver knows the exact loading site, dock number and the details about the cargo being loaded.

Precise control of the warehouse process task stages – the whole driver’s stay is described by sequent tasks, the system ensures if the driver leaving the facility has completed all the process stages.

Automation of the information flow – based on the delivery schedule from the logistics system, the access control receives the necessary information about the drivers – suppliers and the vehicles. It also receives projected time of arrivals.

The forwarder made the notification of the cargo pickup at one of the client’s warehouses. The forwarder is a client’s regular bussines partner and their drivers have access cards to the warehouse area.

If there was a system at this facility, that would send the driver a text message with the dock number and the pickup status two hours before the planned loading time, would there be such a confusion? Would the driver, after reading the access card at the facility gate, get the complete information once more on a dedicated screen and be let in?

After entering the warehouse area, the driver looks among the workers for the information about the cargo prepared for his pickup. At the dock, another driver is loading their vehicle. Our driver’s cargo is left so close to the other driver that he accidentally loads it together with his pickup. The drivers both loaded their trucks and left. As the result of that, at the unloading site, it comes out that one vehicle has excess cargo and the other one is missing it.

Could that situation be avoided? If there was a system at this facility that would add another layer of the cargo loading control, by presenting and monitoring the position of cargo, could there be such confusion at the loading? Does the system alert about the presence of cargo from another delivery and allow keeping constant control of the loading site?

RFID technology in the logistic process

Identification of people – the product establishes equipping people with contactless cards, allowing the system to clearly identify a person at any of the designed checkpoints e.g. at the facility entrance, warehouse gate, cargo terminal. Unambiguous identification can be used to centrally print the storage documents.

Loading control – the Logistic Process Security system localizes the transport units using the RFID tags and controls their location based on the loading schedule. As part of the solution, the transport units are equipped with RFID tags, allowing the system to detect their presence from a large distance. Localization information is used to control the units being loaded in regard to the loading schedule. The system also alerts about adverse situations like a transport unit getting to a different location than planned. This way errors in the form of drivers loading other driver’s cargo can be avoided.

“WMS, TMS, YMS, ERP… we glue it all together adding a security layer guaranteeing the accountability of the whole process. Let’s secure the process end-to-end.

The automation of drivers’ and vehicles’ entry to the facility/warehouse area – based on the schedule from the logistic system, the system grants adequate permissions for the driver to enter the facility.

SMS notifications – the system has the ability to connect to the SMS gateway, allowing itself to inform the drivers about the planned visit details well in advance – the loading status or the assigned dock.

Traffic lights at the dock. Controlling the vehicle presence at the correct dock with feedback for the driver delivered by traffic lights mounted exactly by the dock.

Controlling the dock’s gate and ramp work. The Logistic System Security guarantees that the gate won’t open if the correct vehicle doesn’t park at it and the correct driver doesn’t start the loading process.

The weighted vehicle control and identification and triggering the weighing process – the integration with the weighing system allows to automate the process and above all – it eliminates the weighing attempts made before the loading.

The document deposit service – granting access to the boxes and reacting to the post withdrawal. After getting the notification on the terminal screen and reading the contactless card, the driver opens the boxes assigned to his route.

The control & identification of the drivers and vehicles departing from the facility/warehouse area. The system prevents the departure of vehicles and drivers who haven’t finished all of the loading process planned stages.

Conducting the OHS training – The Logistic Process Security informs the system operator if there is a driver without the current OHS training entering the facility. 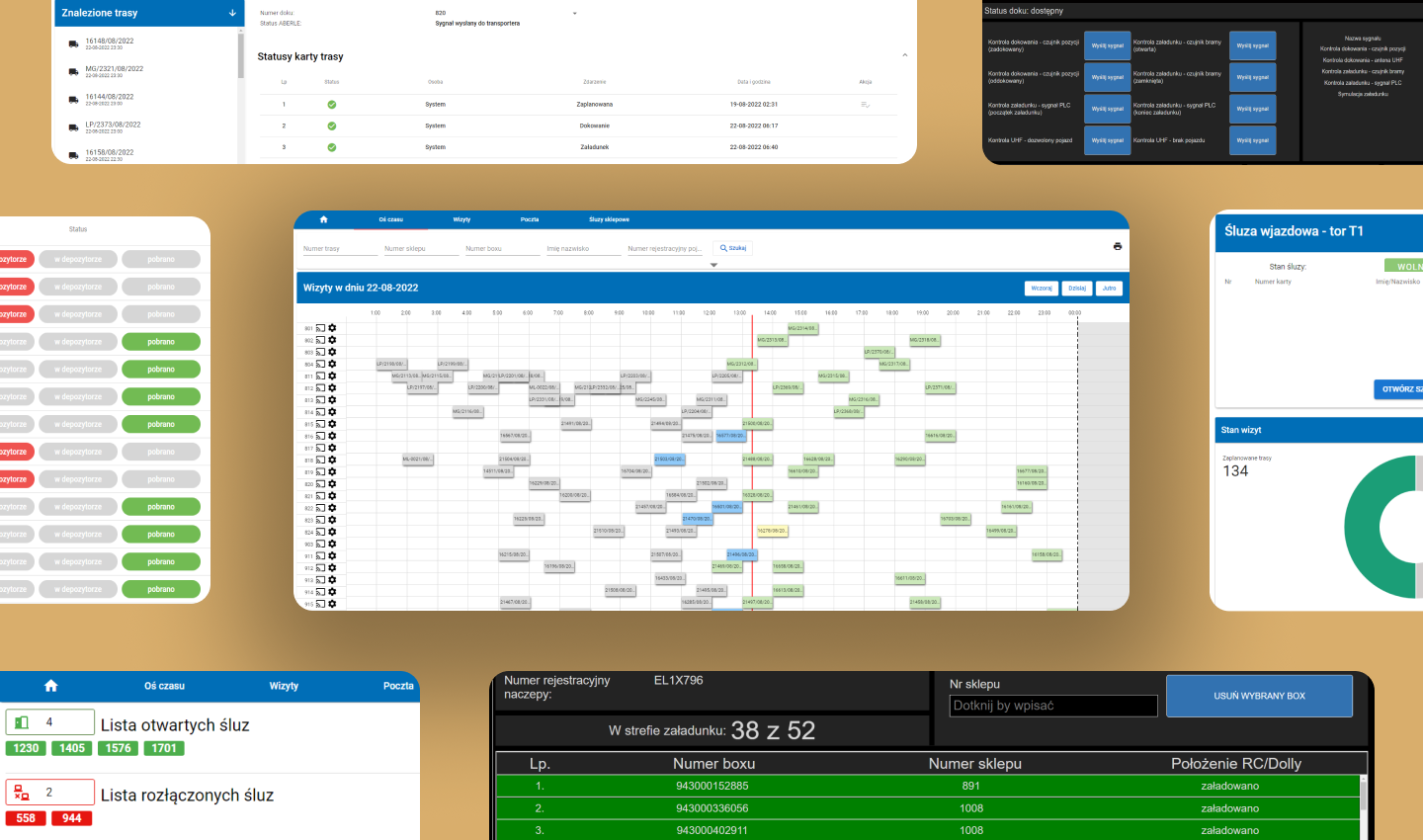 It integrates itself by RestAPI, RabbitMQ data bus and databases. Every integration of the Logistic Security System with third-party systems is conducted individually, optimizing the systems’ setup process.

Currently, Security of Logistic Processes is fully integrated with other Secorun package products: